I've always had the urge to create. Ever since the age of two, when I started to draw, I have continued to follow that urge where it leads. I am drawn towards images of the moon, the ocean, whales, trees, and the female form. My imagery is dreamlike and tells a story that others can see their stories in.

My work has been shown in galleries  across the United States and has been published in books, zines, and magazines. I have a BFA from Massachusetts College of Art. I currently live with my husband and two children outside of Boston, Massachussetts.

Join my Email List to be notified about new art and places to see my work. 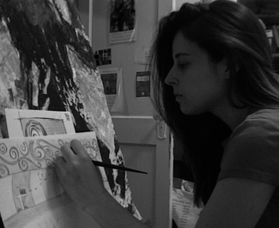 May 2017 - Present: Conflict Resolution featured in the Mediation Department at Harvard Law School

2014: Artwork featured in the book The Geography of Loss by Patti Digh

December 2012 - January 2013: Several pieces are included in the Small Works show at The Whole 9 Gallery in Culver City, CA.

December 2012: My piece, "Creating a Forest of Her Own" is featured in the online magazine, Sprout.

Fall 2012: My piece Whale Dreams is featured on the cover of a cd of meditative music, Traveling Waves.

April - May 2012: 5 pieces in the "Through Rose Colored Glasses" show at the The Whole 9 Gallery in Culver City, CA.

March 2012: Fishing for the Moon is featured in Presence: An International Journal of Spiritual Direction.

November 2011: Lantern is featured on the cover of Wild Sister Magazine.

May 2011: Essay and artwork included in Carmen Torbus's The Artist Unique: Discovering Your Creative Signature Through Inspiration and Techniques

April 2011: Artwork included in Patti Digh's: What I Wish for You: Simple Wisdom for a Happy Life

October 2010: Artwork included in Patti Digh's Creative is a Verb: If You're Alive, You're Creative

2009 - 2010 Subway Stories orignals and prints are featured at Oak, a shop at 245 Newbury Street, in Boston, Massachusetts.

Summer 2009: Featured in 2 articles in Artful Blogging Magazine. Among the many features pieces is Centaur's Message.

Four pieces of my art are featured in the fabulous new book by Patti Digh, Life is a Verb: 37 Days to Wake Up, Be Mindful, and Live Intentionally.

Summer 2008: Featured in Calyx: A Journal of Art and Literature by Women. Featured pieces include Dreaming of the Seven Sisters, Lighthouse, and Memory Cycles.

February 25th - May 1, 2008: Art on display at the Lincoln Street Coffee in Newton Highlands, MA.

March 2008: Betwixt and Between featured in the March issue of Presence Magazine

September-October 2007: "Flying" featured in the online zine, All Things Girl.

February 2007: Artwork in the Lovely Hearts Exhibition at Artstream in Rochester, NH.

2005 : Represented by the Canvas Alley Gallery in Reading, MA.

May-June 2004: The World Headache Alliance asked to display my piece, Migraine, on their website.